The Wrap: Delta Airlines Partners with Lands' End for Uniform Overhaul and More

Perhaps Delta Airlines tapped Lands' End to update its employee uniforms after the American Airlines uniform debacle. Either way, the powerhouse airline is teaming up with the retailer to manufacture and supply uniforms for about 60,000 Delta employees, according to the Wisconsin State Journal. Zac Posen will design the uniforms, but if you're looking for specifics, all Delta has offered is that the uniforms will integrate "fit, form, function and style." 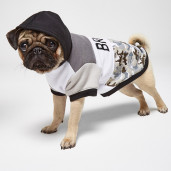 If you think your dog's apparel closet is lacking, UK-based clothing retailer River Island might have the ticket. According to Allure, River Island will debut RI Dog, a fashion line for dogs featuring eight apparel pieces. After all, can Fluffy truly blend in at the dog park without a sassy slogan tee?

We all remember Ryan Lochte as that guy who lied at the Rio Olympics. He's tried to improve his PR image by participating in "Dancing with the Stars," but perhaps that's not enough to save the swimming sneak. According to People, Lochte plans to open a store called Black, which will sell, you guessed it, all black clothing. In terms of the genius logic behind the store, Lochte said, "Everything in the store will be black. Because you know how everyone wears black clothes? Different brands, but all black."

Maybe Hilary Swank's time training for her role in "Million Dollar Baby" made her realize her true calling: athleisure. This week, the actress launched an activewear line called Mission Statement, according to W Magazine, and it's got people talking. For example, the collection features leather pants and cashmere layering pieces, making the clothing line versatile enough to transition from the gym to the streets.

Pastel shades, cut-out designs and anti-Zika apparel—these are the trends on the rise for the fall. Maternova, a company that specializes in women's health, will release a line of anti-Zika apparel. Currently, the collection is crowdfunding on Republic, and has raised about $38,000. The company still is working out the price point details, but  hopes to provide a solution to the growing Zika epidemic with its EPA-approved repellent clothing.