The Wrap: How Donald Trump's Win Affects the Retail World and More 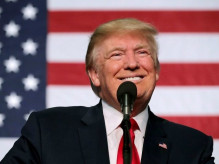 With Donald Trump winning the presidential election last night, many businesses are left wondering, "How will this affect me?" For retail sales, Forbes predicted consumers will not make big purchases, and small purchases will also decline. Forbes also predicted the election will more severely impact labor-intensive retailers than technology-backed retailers, like Amazon and Wal-Mart.

No stripes are safe, according to Adidas. According to The Fashion Law, the athletic apparel company has initiated a trademark battle with Nike-backed soccer team FC Barcelona for designing a square containing seven vertical stripes. Adidas alleges that the striped design too closely resembles the company's iconic three-striped design. For now, maybe FB Barcelona should switch over to a leopard print design just to be safe.

Lots of trademark news this week, as Levi Strauss & Co. filed a complaint against Richard I Spiece Sales Co. Inc. (under the name Denim Express). The case is all about the "Tab" trademark in the seams of the rear pocket, according to the Northern California Record. No word on whether or not the case will go to court, but we'll be keeping tabs to see if Denim Express needs to pay up.

The University of North Dakota is taking action to keep audience members from wearing obscene clothing to sporting events after vulgar T-shirts were spotted at a recent game. UND officials were "disgusted" by the T-shirts' obscene images, according to TwinCities.com, and the school is working to take action moving forward.