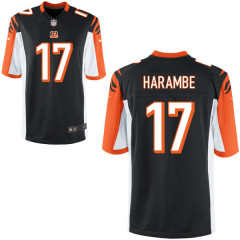 Everyone know’s Harambe’s tragic story. The 17-year-old gorilla was shot and killed at the Cincinnati Zoo after a three-year-old fell into his enclosure. There are countless Harambe-themed memes and T-shirts—and apparently sports jerseys. So many, in fact, that the name was added to Fanatics’ list of banned words that fans cannot use when customizing the nameplate on the back of a major league sports jersey after an MLB official raised concerns, ESPN reported. But once people caught onto the ban, Fanatics quickly removed it from the list, which consists mostly of profane and slang words, and let fans resume their Harambe pride. (Unless you’re a Cincinnati Reds fan. We tried customizing the jersey on Fanatics, and it wouldn’t let us.) 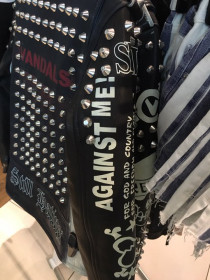 Another week, another overpriced piece of apparel with a band name on it. Except this time there’s a twist: TopShop, the U.K. fashion retailer, doesn’t have permission from the band Against Me! to use its trademarked name and logo on the arm of the $700 leather jacket the store was selling, Consumerist reported. After Laura Jane Grace, the band’s lead singer, called the retailer out on Twitter for its unauthorized use, it appropriately responded that it is looking into the situation and has removed the jacket from its website and physical stores. 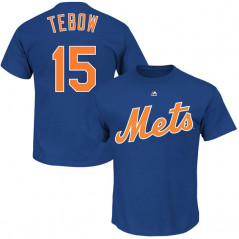 As fans of underrated MLB players, we rarely find our favorite players’ names on shirts and jerseys—we have to custom order them. But fans of the New York Mets and Tim Tebow, the former NFL star who recently signed a minor league deal with the Mets and has yet to take a single at-bat in the majors, don’t have to suffer the same fate. According to YourErie, Tebow’s No. 15 jersey and T-shirt are not just on sale, but were already listed as the top sellers in the Mets’ online store Monday evening—the same day as his first instructional league workout. (Did we mention he hasn’t even made the Mets’ roster yet?) 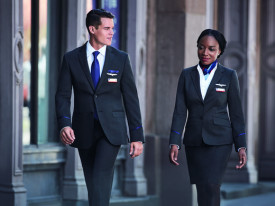 Is your wardrobe in need of an update? American Airlines employees know how you feel. But on Tuesday, they finally got that refresher. For the first time in nearly 30 years, the company’s pilots, flight attendants, customer service agents and airline club workers will sport a new, modern look, USA Today reported. The refresh is a way of unifying the brand after 2013’s American Airlines-US Airways merger. The new color scheme, which features slate gray, cobalt, white, blue and red, incorporates both of the airways’ colors. The new uniforms also include a line of accessories, like custom-designed handbags, and will see new pieces added to the collection every few years to keep things modern. 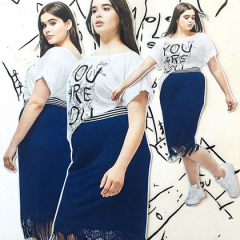 Unfortunately, it seems like there’s a major brand ripping off an independent designer every other day. That’s what New York artist Shantell Martin is alleging fashion retailer Lane Bryant has done (twice!), AdWeek reported. The brand started selling white T-shirts with “You Are You” in handwritten letters, and drawings of stick figures, mountains and trees in the background. While Martin doesn’t own a copyright on either aspect of the shirt, Martin said the background comes from a drawing of hers that has been cut up. The wording is also similar to many of her works, which have included phrases like “Who Are You?” “You Are You” and “Are You You,” which served as the title of her solo museum debut. Lane Bryant has since removed the shirt from its site, deleted social media related to it and passed the issue to its legal team.