Sometimes, we purchase new clothes and later notice broken zippers, ripped hems or weird stains, but we can tell you one thing we never find: dead rats sewn into the stitching. But for one unlucky Zara shopper, that's exactly what she found, according to CNN. Cailey Fiesel literally smelled a rat and traced the odor to a dead rodent sewn into her new Zara dress. Fiesel is suing the company for damages, and Zara is saying, "Rats!"

Even after Donald Trump won the presidential election, Macy's is holding strong on its decision to not carry Trump's clothing line, according to The Street. The company said it stood for diversity, and Trump's statements did not align with its policies. Furthermore, Macy's chairman Terry Lundgren said the company doesn't "want to be a politically associated company," so if Hillary Clinton is planning on taking her time off to launch a pantsuit collection, Macy's won't be having that either. 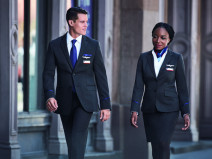 Remember when we told you that American Airlines employees complained about their new uniforms causing rashes and hives? Back then, 400 flight attendants complained, but now, the number has grown to more than 1,300 complaints, according to Fortune. The company still is investigating what the problem is, but the Association of Professional Flight Attendants found detectable levels of chemicals usually found in pesticides and fertilizers.

A two-time cancer survivor is considered a dress code violator at his high school, according to ABC Action News. After wearing his Relay for Life survivor shirt, the school told him he had to take it off, and threatened suspension. School officials said the T-shirt violated the school's new dress code policy, but fellow students and family members are saying this is going overboard.