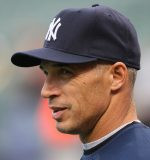 Having amassed 900 managerial victories entering today’s tilt versus the Tampa Bay Rays, Joe Girardi, with 822 of those triumphs coming as the New York Yankees skipper, has definitely won over the hearts and minds of the Bronx Bombers’ faithful. Owing to his apparel decisions, the 52-year-old could come to count many backers outside the Empire State, as he will don a different charity’s T-shirt during each home pre-game press conference and return the autographed item to each entity to determine fundraising measures.

“I know we have HOPE Week,” the 10th-year leader said Monday of the organization’s Helping Others Persevere & Excel initiative that helps the less fortunate. “But there are a lot of other organizations that deserve recognition and help because they’re helping others, so if you can bring some light to their cause and it tugs on somebody’s heart, it’s a good thing.”

The club commenced its second season of honoring such selfless institutions by saluting Sparrow’s Nest, with Girardi covering the Yankees immortal pinstripes through a nod to the Hudson Valley helpers who provide resources to cancer-stricken parents and guardians. The Monday unveiling obviously made for a touching emotional moment that his charges built upon by blasting their American League East peers 8-1. The decision gave him the aforementioned lofty win total, and while people will continue to track the team’s progress as the athletes look to add to the annals by chasing their franchise’s 28th World Series title, Girardi’s T-shirt selections could receive as much attention among altruistic groups as his lineups and bench moves do among the national pastime’s enthusiasts.

With 79 more contests through Oct. 1, Yankee Stadium will definitely see its share of home runs. Here’s hoping charitable organizations will knock a few out of the park, too, thanks to Girardi’s example.