Now that we've dug through YETI Coolers' plentiful lawsuits, the latest being against Walmart again, thanks to the latter's refusal to fulfill the obligations of the first lawsuit, we can look some other big news over in YETI land.

Are you sitting down for this? (This is a great joke that you'll get in a second, I promise.)

YETI has launched a new line of folding chairs called the Hondo. It looks like plenty of other outdoor folding chairs we've seen before, but, as YETI tends to do, they pulled out all the stops to make sure it's as durable as can be. As John Hammond says in "Jurassic Park," they spared no expense. This chair was influenced by the perceived weakness of other camp chairs. 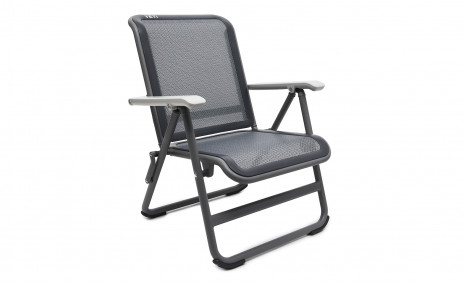 According to the YETI site, the chair uses what it calls "Diehard Joint Construction," i.e. cast joints, "like the ones used on your truck's door hinges," to handle pressure. The frame is also reinforced with two layers of aluminum alloy. The frame is coated with a UV-resistant paint commonly used for the exterior of buildings.

According to Gear Patrol, YETI brought in Brian Langerak, who previously worked at Herman Miller on the Aeron chair, to make the chair a reality. YETI's design utilizes stretching fabric and molding it with the frame of the chair, and that process is used only at Herman Miller.

During the testing phase, the chair withstood up to 3,000 lbs. of pressure. It's also designed to stand up to sunlight, saltwater, freshwater and more.

There are a few important things to note here: The lawsuit-sized elephant in the room is that YETI is very litigation-happy when it comes to protecting its intellectual property. The second, which ties into that first point, is that the design elements used in this product were only used in one other product. If others try to copy that process, YETI could very easily claim infringement on the basis that it couldn't have been a parallel idea.

After all, YETI claims its trade dress extends not only to the branding on its beverage insulator products, but also to the specific curves of their construction, and has used that as one of its primary arguments against the likes of Walmart.

The other point to make here is that outdoor folding chairs have been popular in the promotional space for some time. Since YETI has burst onto the scene, they've caused competition in drinkware and outdoor categories with insulators and coolers. With this chair, the company not only ups the ante in terms of durability, it also creates a new thing for companies to think about when creating products to help cash in on the YETI craze: Draw inspiration, but don't copy.

Because, as we've seen, YETI wants nothing more than to keep its intellectual property its own, and will stand up to even the biggest companies who don't play by that rule.