Could Yoga Pants Be the Source of Ocean Pollution? 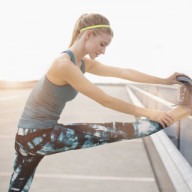 There's no denying that athleisure staples, like yoga pants, continue to dominate the apparel market. However, everyone's yoga pants obsession might come with a major drawback, according to U.S. News & World Report.

Gulf Coast researchers are launching a two-year study into the microscopic plastics that make their way into the ocean. Research has shown that athletic apparel could be the latest source of ocean pollution, because they shed plastic fibers, commonly known as "microfibers."

When the researchers began this study, they expected to find that microbeads were the main offenders, in terms of ocean pollution. Instead, microfibers made up the bulk of the uncovered materials.

As of now, there is little research into the affect of microfibers on the ocean food chain. But the Mississippi-Alabama Sea Grant Consortium hopes to get to the bottom of it.

In the meantime, Patagonia pledged its support for research surrounding microfiber pollution, and the company will promote information to consumers about ways to minimize microfiber shedding.