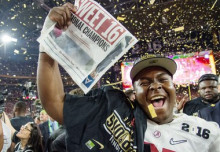 A University of Alabama player after the National Championship Game; Image via Al.com

This year, the University of Alabama football team won its 16th NCAA National Championship. Naturally, some used "Sweet 16" to commemorate the win, but you won't see any official Alabama merchandise with that phrase. That's because "Sweet 16" is trademarked by the Kentucky High School Athletic Association, and can only be used when referring to the NCAA Division I men's and women's basketball championships.

According to Al.com, Chad Collins, general counsel for the Kentucky High School Athletic Association, said that the association registered the trademark in 1988 after its annual tournament. But, he added that the phrase, which refers to the 16 regions in which the state's high school sports are divided, had been in use since before 1960.

Luckily, Alabama didn't even try to use the phrase, but other teams have tried (and failed) in the past.

However, people are able to use the phrase when referring to someone's 16th birthday. The trademark only relates to athletics.

Sweet 16 isn't the only sport-related phrase that marketers should avoid using. Previously, we reported that the phrase "March Madness" was trademarked as well. Here are a few more that some might not be aware of:

"Three-Peat": According to Business Insider, when the 1988 Los Angeles Lakers fought for their third straight NBA title, Lakers coach Pat Riley used the now-well-known phrase, and trademarked it in 1988.

"You cannot be serious!": Hot-headed tennis star John McEnroe shouted this phrase after he disagreed with a call at Wimbledon 1981. Business Insider reported that McEnroe not only trademarked the phrase, he named his book after it.

"Unbelievably believable": Redskins quarterback Robert Griffin III (or "RG3" for short, which is also trademarked) filed the trademark for this phrase after his 2013 Heisman Trophy speech, along with six others—"No Pressure, No Diamonds," "Dream Big, Live Bigger," "Light You Up" and "Know Your Why," according to Business Insider.

"Mr. October": Reggie Jackson is objectively one of the greatest baseball players to ever live. He gained the nickname "Mr. October" because of his unbelievable postseason performances for the New York Yankees and Oakland Athletics. Unfortunately, according to ESPN, he now owns that trademark, so someone who wants to battle Jackson for the title of Mr. October by putting it on a T-shirt is out of luck.