By now, you've probably heard the term 'gluten free'—even if you don't exactly know what gluten is. 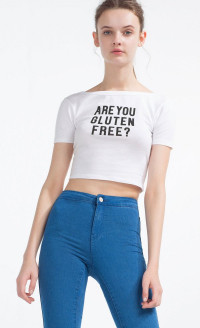 A few years ago, mostly only people with celiac disease—where gluten damages the small intestine—stuck to gluten-free diets. But recently, reports have come out that almost anyone can benefit from such a diet. Even celebrities, like Miley Cyrus and Kim Kardashian, have shared how much better they feel, mentally and physically, after cutting out gluten.

Spanish retailer Zara found a way to capitalize on the recent hot topic. According to Entrepreneur, the company released a white crop top late last year that read “Are You Gluten Free?” and it has gotten mixed reviews.

While some shoppers praised the shirt for bringing awareness to the autoimmune disorder in a fun way, others thought it made a joke of it. We found these tweets arguing both sides of the case.

So much for pulling these offensive shirts @ZARA. Still on display in your Maidstone branch #glutenfree @Coeliac_UK pic.twitter.com/MuQpEI7dUj

A change.org petition was started to get the shirt pulled from shelves, and Zara listened to the 53,000 people who signed it. According to Entrepreneur, Zara released a statement that said, "We sincerely regret that this case might be interpreted as a trivialization of celiac disease, the absolute opposite of our intentions."