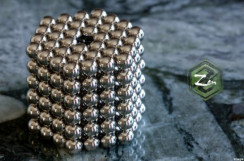 Zen Magnets petitioned the CPSC to allow for safe manufacture and sale of magnet toys.

Zen Magnets, creator of the Buckyballs toys, has been at the center of controversy after the item, which includes small magnets, was recalled. After that, the company found itself in hot water in December for selling the recalled products. Finally, the company accepted the fate of Buckyballs by hosting a mock-funeral for them, and melting them down in an industrial oven.

This week, however, the company announced that it has filed a formal petition to the CPSC, proposing new legislation for a safety standards for all brands of small, rare-earth magnet spheres, like the Buckyballs.

The company submitted the petition after the 10th Circuit Court of Appeals vacated the CPSC's 2014 rule. The court found that the rule wasn't properly supported by injury data, and the CPSC acknowledged this.

After the rule was put in place, other companies sold knock-off items, many of which lacked proper warnings of ingesting the magnets.

Going forward, Zen Magnets hopes to collaborate with the CPSC to create regulations to ensure safe manufacturing of the small magnets, which would allow the distribution of Zen Magnets and similar products for education, recreation, art and science.