Remember Zen Magnets? We sure do. Back in 2015, the company was ordered by a federal judge to stop selling (and destroy) its recalled magnetic balls. The CPSC banned them because the small magnets could cause serious intestinal harm if swallowed. After (unsuccessfully) fighting the CPSC to retract the ban, Zen Magnets finally complied with the regulators and destroyed $40,000 worth of magnetic balls.

But, not going down without some serious snark, Zen Magnets held a mock funeral yesterday, eulogizing the once-beloved desk accessories.

The Denver Post reported that Zen Magnets rented an industrial oven to melt the almost half million magnetic balls. 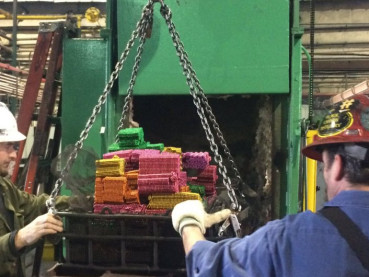 "Truly, as we bid fond farewell to these magnets, we also mourn the smothered flame of insight and creativity they could have reflected from many a human soul for many years to come."

This is the final chapter in a lengthy legal battle, and a CPSC spokesman told The Denver Post that, out of all of the companies it contacted to stop making these small, metallic toys, Zen Magnets was "the only company that didn't agree to settle."

At first, the company tried to rid themselves of the products by donating them to the Colorado School of Mines, but the school backed out after CPSC involvement.

The CPSC spokesman said that the agency is continuing legal action to pursue a total recall of all of Zen Magnets's existing magnets.

Magnets to magnets, dust to dust. All we are is a bunch of tiny magnets in the wind.