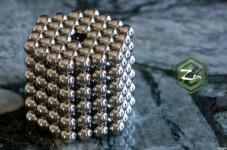 Marketed as "sculptural" desk toys, the magnets retail in large sets of hundreds. According to the Consumer Product Safety Commission (CPSC), the magnets can pose a serious fatality risk if ingested because of the magnetic attraction.

Previously, Arguello issued a preliminary injunction banning Zen Magnets LLC and its owner, Shihan Qu, from continuing to sell the magnets. Instead, Zen Magnets purchased about 917,000 small magnets from another company and sold the magnets, violating the Consumer Product Safety Act.

"Though we respectfully disagree that Zen has violated a provision of the CPSA regarding a prior recall, we accept that the court has made its ruling and we will abide the court's orders," said Qu.

"[The judge's decision] puts the rule of law and the safety of children above the profits sought by Zen Magnets," said Elliot F. Kaye, chairman of CPSC. "Far too many children have been rushed into hospital emergency rooms to have multiple, high-powered magnets surgically removed from their stomachs. Young children have suffered infections and one child tragically died from swallowing loose magnets that often look like candy."

This is not the first time the CPSC has targeted small magnets. Previously, the company filed a suit against Buckyballs, a similar magnetic toy.