Zen Magnets Isn't Backing Down Against CPSC After Another Stop-Sale 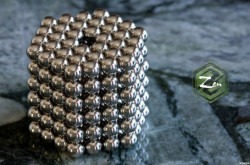 Zen Magnets won its appeal against the CPSC, allowing the sale of magnetic toys, but received a new stop-sale specific to the company last week. | Credit: Zen Magnets

The road traveled by Zen Magnets, through CPSC stop-sales, appeals and faux-funerals for recalled products, has been a long one. The Consumer Product Safety Commission first ordered a recall due to the products' small size, posing a choking hazard, and stated that Zen Magnets didn't properly issue a warning with sale and "failed to prove the existence of a defect, either in the design of the product or in the warning."

While other companies that sold similar products stopped the sale after the CPSC cracked down, Zen Magnets took the battle to court, successfully fighting the recall and the nationwide ban issued on the small magnet toys, which at first was successful. This allowed companies that sold the small, spherical magnets, to continue doing so.

But now, the CPSC issued another stop-sale to Zen Magnets after it appealed Zen Magnets' victory in court regarding the recall. Because Zen Magnets won that case, other companies are legally allowed to sell these products. But, this stop-sale is specific for Zen Magnets.

Zen Magnets' founder, Shihan Qu, issued a statement on YouTube, detailing the company's past legal battles, this current issue with the CSPC, and the company's outlook.

"The great irony is that the one U.S. magnet sphere company which has the strongest warnings, the one that is doing the most to try to make magnets safe, the one that is willing to work with the CPSC, is the only one that is targeted for stop-sale," Qu said in an email to Promo Marketing. "The result is that magnet sphere demand is directed to the hundreds of low quality sellers on Amazon, eBay and elsewhere on the internet."

Qu said in the video that Zen Magnets isn't giving up the fight just yet, but without being able to sell its products, it's hard to keep the business afloat for long enough to see the case through, let alone fund a legal case at all.

"The good news is that we're now at that stage in the recall fight where the case is right for judicial appeal," he says in the video. "When we appeal, it's going to be in a real court, unlike what happened with the CPSC making us stop selling magnets where they appeal our appeal with their commissioners, who are the same ones that voted to sue us in the first place to stop selling."

Qu continues to say that he feels confident in the appeal, citing the company's past success in battling the CPSC in court and the fact that federal judges and CPSC staff have stated that the commission's injury data is "intellectually dishonest."

In order to keep the fight going while taking the hit from not selling products, Zen Magnets is looking for a stay with an emergency injunction, which would let it continue to sell its products through the appeal process.

"It's hard to say what will happen," Qu continued in the video. "This might be where Zen Magnets ends. That's a perfect possibility. Though, we have faced worse odds before."

California's New Plastic Packaging Law Is the Strictest in the U.S.
Comments
The Top Lists