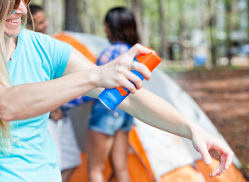 With reports of the Zika virus worrying consumers, purchases of bug spray have increased rapidly. CBS News reported that, according to market-research company IRI, sales of insect repellents have increased 11.2 percent from last year, topping $516 million.

CBS News reported that SC Johnson & Son has seen skyrocketing demand for its OFF! insecticide and Spectrum Brands bug-spray products. As a result, the company has increased production to meet demand.

"Our plants are working around the clock to meet customer and consumer demand," stated SC Johnson & Son, according to CBS News. "[We are] looking into every possible option to ensure effective products are going to those that need them most. This includes production in the U.S. and in all the markets where we operate."

Eric Kenney, vice president of home and garden marketing for SC Johnson & Son, told CBS News that the company's mosquito-repellent products have soared between 30 to 150 percent during the past weeks, and demand is especially high in Texas, Louisiana, Florida and Puerto Rico.

New York City also has seen a sales spike in repellents as a result of travelers headed to countries where the Zika virus has affected the population.