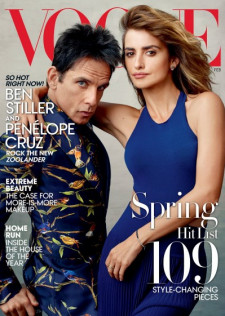 The worlds of entertainment and fashion can be really, really ridiculous. So, it makes sense that the hybrid of the two would produce really, really, ridiculously good-looking male models, right? Right.

If you didn’t know, “Zoolander 2” hits theaters Feb. 12—and the movie’s marketing tactics have been particularly creative.

But this is hardly the first time the franchise has employed fashion in the name of promotion.

In fact, marketing for the highly anticipated sequel began last year during Valentino’s Fall 2015 show in Paris, where Stiller and Wilson closed out the show with a model walk-off as their characters Derek Zoolander and Hansel.

Soon after the show, images appeared of the two donning Valentino’s camouflage apparel in front of the Eiffel Tower.

In more recent efforts, Stiller and Wilson have all but become their on-screen counterparts. According to People, Zoolander and Hansel tried to best one another with their model poses in a model-off in a window display at Valentino’s storefront in Rome.

Zoolander (or, technically, Stiller) landed the cover of Vogue’s February 2016 issue alongside co-star Penelope Cruz, as well as Esquire UK’s March 2016 cover, which touts Derek Zoolander as the biggest name in menswear.

The day of the premiere also saw the launch of a promotional collaboration with Kiehl’s, called “The Derek Zoolander Center for People Who Don’t Age Good,” Adweek reported. Inside the center, named in reference to the “Derek Zoolander Center for Kids Who Can’t Read Good” from the original film, visitors are led by male models (but why male models?) through a series of anti-aging processes, like a misting from Kiehl’s anti-aging serum and a “finger runway,” which is as bizarre as it sounds.

On top of all of these efforts, Zoolander and Hansel dropped by to do the “Weekend Update” on “Saturday Night Live” to talk fashion and politics (and the mix of the two), and Zoolander also took over Barbie’s Instagram.