Since Apple’s 2017 release of the iPhone 8 and iPhone X as their first Qi-compatible devices, it’s become the standard wireless charging method, allowing more companies to install Qi chargers for public use. Today you’ll find Qi chargers installed at select Starbucks and McDonald’s locations, airports and hotels around the world, at Facebook headquarters, built into a line of IKEA lamps, and as a standard feature in a few of the latest car models. The acceptance of Qi charging as the standard wireless charging method means the time to embrace promotional Qi chargers is now. 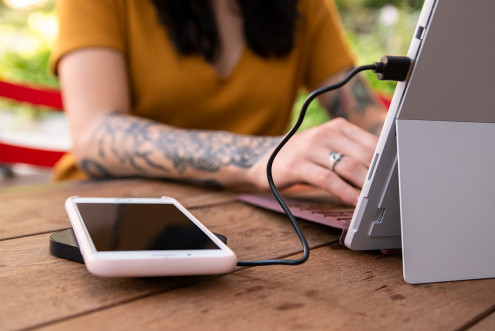 A Better Way to Charge

The best way to keep a smartphone battery healthy is as easy as a-b-c: always be charging. Lithium ion batteries have a lifespan of up to 500 charge cycles, a charge cycle being when it goes from fully charged to no charge at all. If you let your smartphone battery completely drain every day before recharging, its capacity will last at most 500 days. Smartphone users need a better way to charge their phones more often, ideally keeping their phone battery between 30 to 80 percent charged. Good news—wireless Qi charging is here, and today there are over 90 Qi compatible smartphones on the market! Qi chargers can easily live on a desk, counter or nightstand, so smartphone users can simply place their phones on the Qi chargers at their convenience throughout the day. This makes Qi chargers ideal for offices, where people often leave their smartphone idle for extended periods at a time.

Once you set a Qi compatible smartphone on a Qi charging pad, an electrical charge is transferred from the Qi charger to a receiver coil in the back of the smartphone via electromagnetic induction. The charger uses an induction coil to create an alternating electromagnetic field, which the receiver coil in the back of the phone converts back into electricity to be fed into the battery. As a common example, inductive charging is the same technology utilized by the most well-known electronic toothbrushes.

Qi chargers typically take the form of a puck, mat or stand, meaning ample room for promotional branding. Qi chargers are left plugged in, but only emit power once the receiver in a smartphone makes contact with the charger. The best part about this for the promo industry is that, unlike a promotional wall adapter, a promotional Qi charger is more likely to live permanently on the top of someone's desk, rather than hidden under it.