There's nothing worse than spending countless hours brainstorming a new marketing campaign only to have it flop. But thankfully, your clients probably never had a marketing disaster as big as these. Recently, Reddit users put together a list of the worst marketing mistakes of all time, and I'm sharing some of the top ones with you.

In celebration of the release of EA's new video game "The Godfather II," the gaming company sent fans pairs of brass knuckles. The only problem is brass knuckles are illegal in most states.

In an effort to get more prospective customers, Lipton Tea launched a marketing campaign which unintentionally gave customers an endless loop of free tea. Because every package of tea included a coupon for a free pack of tea, the company quickly learned they were giving away too much tea.

(Image via The Guardian)

It's always great to release a new, inspiring slogan for your team. However, it's best to make sure there's no potential for inappropriate hidden meanings first. Vanderbilt football learned this lesson the hard way with its "We Don't Need Your Permission" tagline.

Kentucky Fried Chicken made a mistake during its translation process in a big way. When the company opened its stores in China, it accidentally translated "Finger Lickin' Good" to "Eat Your Fingers Off."

The famous movie "E.T." apparently asked M&M's to give permission for the movie to use the candy during filming. The company refused, and the movie went on to use went on to use Reese's Pieces, a then brand-new candy from Hershey's, for the shoot. Reese's popularity grew wildly, and M&M's was left regretting its mistake.

Urban Outfitters is no stranger to controversy, but it's unclear what on Earth it was thinking with this "blood-stained" Kent State University sweatshirt.

It doesn't take a rocket scientist to see how Dr. Pepper's marketing campaign here did not go over too well with the general population. 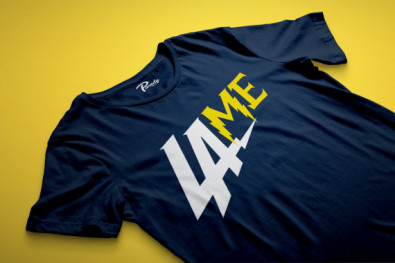 It was upsetting enough that the Chargers unexpectedly relocated from San Diego to Los Angeles. But to add insult to injury, the team used an unoriginal logo for its rebranding, and social media was buzzing with criticism. Back to the drawing board for the Chargers. Similarly to Vanderbilt, Budweiser did not vet its new slogan, "The perfect beer for removing 'no' from your vocabulary for the night." No surprise it was met with a ton of backlash.

(Image via the Belfast Telegraph)

Nike wanted to launch an exclusive shoe for Saint Patrick's Day, but clearly didn't do its homework. The company launched the Black and Tan shoe as an homage to Ireland's Guinness drink, but Black and Tan is widely known as being a group notorious for attacks on Irish civilians during the War of Independence.