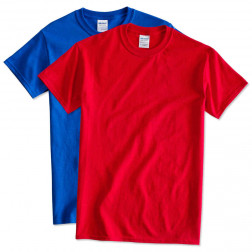 If you're like me, you have a closet full of T-shirts (my favorite is my Spice Girls tour T-shirt). Now that T-shirts have become a true fashion staple, it's not unusual to see the majority of people donning T-shirts as part of their everyday wardrobes. Because of this recent popularity, I started to wonder about the backstory of T-shirts, and decided to do some fact-digging.

After much research, I picked out my 10 favorite facts about T-shirts, and decided to share them with you.

2. The first promotional shirt was produced in 1939, for "The Wizard of Oz." - Blue Cotton

3. The '70s also marked the birth of the “I Love New York” campaign, a T-shirt campaign started by the Commerce department to shift the city’s image to a tourist destination. - Blue Cotton

5. The T-shirt is named for its T shape, and first appeared in the dictionary in the '20s. - ClassB

6. The Guinness World Record for the most T-shirts worn at once is 257. - The T-shirt Factory

7. F. Scott Fitzgerald first coined the word T-shirt in his 1920 novel, "This Side of Paradise." - Quora