And now a brief history lesson brought to you by the highly respected news source, Wikipedia: Cinco de Mayo commemorates the Mexican army’s unlikely victory over French forces at the Battle of Puebla on May 5, 1862. (This is unrelated to Mexico’s Independence Day, celebrated on September 16.) In the United States, Cinco de Mayo has become synonymous with margarita specials and taco dip.

With Cinco de Mayo less than two weeks away, time is running out to plan the fiesta of all fiestas. Dos Equis or Corona? Salsa, queso or salsa con queso? Not sure where to start? Take the promotional route. Here are three products sure to spice things up.

No Cinco de Mayo party is complete without chips and salsa. (If you’re not offering that, please remove me from the guest list.) The Ceramic Bowl/Chips & Salsa Gift Set from Concepts Etc. includes a 16 oz. jar of award-winning, locally made salsa and a 6 oz. bag of authentic New Mexico blue corn tortilla chips in a hand-painted bowl. 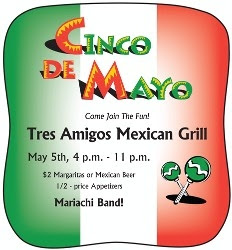 Starting an argument with the person who took the last bottle of beer at the fiesta? Probably not the best idea. Instead, take a swing at the Piñata – Bottle from Seven Sourcing. That way, nobody gets hurt and you’re still keeping with the theme of Cinco de Mayo (it’s obviously a win-win). Everyone knows it’s impractical to fill a piñata with beer, but a good host will stuff it with the next best thing: tons of queso!

(Editor’s Note: Will work for guacamole.)