A Lesson in Branding from a Skate Spot 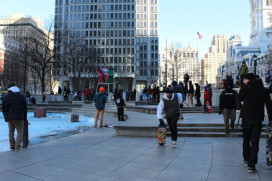 Skaters at Love Park on Feb. 14; Image via the author

Growing up, skateboarding was just about the most important thing in the world to me. I tore through magazines, like Thrasher and Skateboarder, I idolized Tony Hawk, and I watched every skate video I could get my hands on. I was sure that I would be a professional skateboarder one day. This was in the late '90s and early '00s, and, at that time, all of these videos, magazines and video games had one thing in common—Philadelphia's Love Park.

Love Park was a Mecca of sorts for skateboarding. Its long, smooth ledges were ideal for grinding. Its stairs were perfect for jumping down, and some guys even threw themselves down the massive steps and into the empty fountain (known in the skateboarding community as "The Love Gap"). People came from all over to skate at Love Park. As a skateboarder, you couldn't come to Philly without skating there. Sunday was the last day of skateboarding at Love Park before it's remodeled as a grassy space, devoid of granite ledges and smooth concrete.

But, this isn't just a time for me to reminisce about skateboarding (although, I could all day). It's a time to realize the power that one symbol or logo can have on the world. Love Park was a pretty good skate spot, but there are surely better spots, even right around the corner in downtown Philadelphia. What made Love Park the icon that it was the symbol it represented. The classic "Love" statue became almost synonymous with skateboarding in Philadelphia, the East Coast and the U.S. overall. 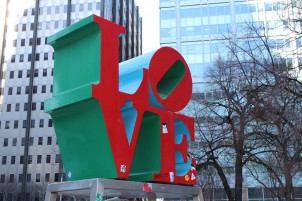 As promotional products professionals, you all know the importance a logo can have. By creating branding campaigns that promote logo and brand awareness, you allow your clients to create a symbol for their businesses. Their logos can become synonymous with quality banking, a world-class education or even just a great hoagie. This seemingly simple statue of four letters stacked on top of each other changed the landscape of an entire subculture and created an identity for a city. Who knows what a well-placed logo on a backpack, T-shirt or umbrella can do for another industry?