The Best and the Worst NBA Playoffs T-shirts

If you're like me, you concluded your relaxing Memorial Day weekend by watching the nail-biter seventh game in the NBA Western Conference Finals. While most people probably were focusing on Klay Thompson's clutch three-pointers and Steven Adams' scary mustache (no offense, big guy), I was zeroing in on the promotional T-shirts the fans were sporting in the stands.

Of course, the games themselves are the most important elements of an NBA playoff series, but the T-shirts are a significant component too. It was no coincidence that both teams played better on their home courts, and it's easy to see why: All you have to do is look up to see your fans are everywhere, cheering you on in your team colors, and you've got an instant boost.

So, add in a T-shirt giveaway to all fans in attendance, and you've got one unified front to send the visiting team home packing.

Another home game featured these T-shirts as the giveaway:

For game three, the Thunder gave fans free T-shirts in two different color-ways (a choice I really like). This way, the team colors are truly represented:

2.  Golden State Warriors
I'm a little disappointed in the Warriors because they really only made one shirt for the playoffs, while the Thunder made at least four different T-shirts. It's a little underwhelming that the Warriors wouldn't try to change things up each night.

However, I really did like the one shirt they used as the main giveaway:

The shirt each fan will get when they enter the building for the @warriors game. #DubNation @kron4news pic.twitter.com/p2KIqA0Adn

Even Bernie Sanders got one:

3. The Cleveland Cavaliers
This team beat the Toronto Raptors to secure its spot as the Eastern Conference champions. For a home game against the Raptors, the team gave away these "Wine and Gold" labeled T-shirts:

I think the above T-shirt is better than the T-shirt the Cavs used in their previous playoff series. The team is using the slogan "All in 2016" throughout its playoff games, but an earlier shirt featuring the slogan looked a little convoluted: 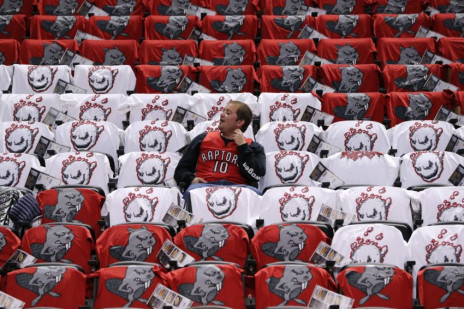 However, what the Raptors did with the actual placement design of the T-shirts every night was amazing:

2. Miami Heat
I get what they were going for with their "White Hot" theme, but the graphic just looks boring:

A closer look at the shirts all True Believers will get at tonight's game, courtesy of @GradyHealth.#TrueToAtlanta pic.twitter.com/i7vH1WGuUl

Also, it looks a little bit like Communist propaganda.