If you're a fan of Dr. Who, always be prepared to answer the question: “Who is your favorite doctor?”

Many fans will probably respond with “Tom Baker,” who played the the fourth incarnation of the doctor (1974 to 1981). I am no exception—Mr. Baker was always MY doctor. For those of you unfamiliar with Dr. Who, shame on you. To be fair, maybe I wouldn't be so knowledgeable about the series if it weren't for my father who notoriously watched odd television shows and movies as my brother and I hung out with him in the living room—sometimes bored out of our minds, other times highly intrigued. However, I would like to think that if I never watched Dr. Who during my childhood, my love for pop culture would inevitably tie me to Tom Baker's trusty companion (no, not his human companion who accompanied him throughout all of his zany adventures). I'm talking about his infamous wool scarf.

Characterized by an endless supply of fabric with bands of color, the scarf was more than just an accessory. Sure, it was stylish, but it also saved people from impending death, created diversions and was used as a measuring device. A true example of when function meets fashion.

So, why Dr. Who and why now? In addition to the season seven premiere of the revamped Dr. Who (starring Matt Smith as the Doctor) airing Sept. 1, I came across an article on Vulture by Matt Zoller Seitz called, “Seitz Asks: What Item From a TV-Character's Wardrobe Would you Most Like to Own?” Of course, Seitz's answer was Tom Baker's scarf. While my love for Baker's scarf is apparent, I'd rather own a Dalek, but that's a different story for a different time (not to mention an impossible wish because a Dalek would quickly exterminate me since I, myself, am not a Dalek). Regardless, I found this to be an interesting question. What would I pick? Furthermore, if this was available as a promotional item would I be more inclined to purchase it? Heck yeah! Two things instantly came to mind.

1. Sophia Petrillo's Straw Purse (Golden Girls)
Whether she was sneaking out of the house to steal Rose's car or headed to bed in her nightgown, Sophia always had a death grip on that straw handbag with the beaded handle. In a way, the purse served as the honorary fifth Golden Girl. Although the Urban Shopper from Southern Plus technically is a tote, its unique paper fiber/cotton blend material gives it an earthy feel. It is fully lined and has a structured body, along with an inside pocket. It comes in dusk (blue) and dawn (red).

2. Alex P. Keaton's Monogrammed Sweater Vest (Family Ties)
Maybe it's because I've been watching a lot of re-runs of Family Ties lately, but I can't get enough of watching Michael J. Fox and his “conservative sweater vest.” It makes Alex P. Keaton, well … Alex P. Keaton (and it also never lets us forget his initials). The Milano Knit Sweater Vest from Vantage Apparel is great way to capture the A.P.K. look. After all, what would we do, baby, without the sweater vest? Made from 100% pre-shrunk combed cotton, the vest features a ribbed V-neck and armholes, locker patch and elasticized ribbed waistband. It is available in sizes XS to 3XL and comes in navy. 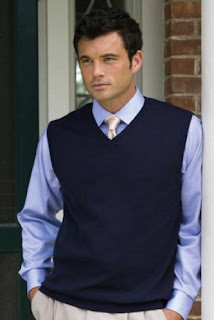 Okay, so where's the Baker Scarf? I have no idea. In the meantime, I'll keep warm and fight off dangerous foes with the Black/White Buffalo Scarf from Boxercraft.

I'm beginning to see a pattern in my last few blogs. If your customers are anything like me, get to know them and find out how to appeal to their interests. Ask questions. This may seem like common sense, but unfortunately good conversation can be hard to come by.

While you're relaxing on the beach, attending BBQs or simply sitting on your couch over the holiday, think about your must-have wardrobe item from a favorite TV or movie character—and check out the new season of Dr. Who. The first episode is called “Asylum of the Daleks.” With a title like that, I'm sure you won't be disappointed.