How David Bowie Changed Me (and the World)

My mother sang in a Philadelphia glam/punk band called Separate Checks in the late '70s and early '80s. At night, she would go on stage dressed as Ziggy Stardust and belt out covers of “Lady Stardust” and “Suffragette City” in bars across the city. I was too young to attend, but on weekends I listened to the band rehearse those songs of alienation, joy, loss and hope. Before she’d leave for gigs, she’d put me to bed and sing my favorite lullaby, “Starman.”

Other little boys wanted to be football players and doctors and firefighters. I wanted to be an alien rock star.

David Bowie was the king of the misfit toys. He was an icon to those on the outside, and a unifying thread for writers, artists, musicians and weirdos across generations. Everyone had a favorite song, a favorite story, a personal experience with this creative force they never met in person. If you ever felt misunderstood in your life, you found comfort in Bowie’s music. 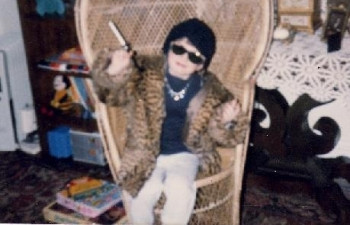 My glam phase, age 4. I don't know where I got that coat.

I was at the Philadelphia International Airport preparing to leave for the PPAI Expo in Las Vegas when I heard David Bowie had passed away. I watched the TV screens report the story in shock and disbelief; I had just purchased his latest album, released on his birthday two days prior. I had just watched him pose and sing in a new music video. I felt alone. His death felt personal.

Long minutes passed before I realized every other person in the terminal was affixed to the news in the same way. Some people made hushed phone calls, most sat silently. A few quietly cried. Everyone in that room was affected.

That was one of Bowie’s many gifts: the ability to speak to an individual while speaking to an audience. Everything he did, no matter how wild and bombastic, felt personal and intimate. He sang songs for the outcasts and outsiders, but who hasn’t felt outcast and outside at some point? He taught us that everyone is different, just like everyone else. Those songs that spoke to you spoke to the world.

David Bowie gave us 50 years of music, film, theater and art that has woven itself throughout culture. Everyone has heard one of his songs; in being one of the most prolific and influential artists, Bowie has created common ties for us all. That’s what he was telling us at the end of “Rock ‘n’ Roll Suicide”: you’re not alone.

Thank you, David. It was all worthwhile.

Convergence Corner: How Jen Stanton Implemented Promo to her Print Business and Never Looked Back

Finding Room for Creative Promotions in the Health Care Market