And the Winner Is...

By Elise Hacking Carr
Facebook Facebook Twitter Twitter LinkedIn LinkedIn Email Email 0 Comments Comments
So, apparently, the 2012 Teen Choice Awards were on Sunday night. I was too busy taking advantage of Farm to Fork week at a local participating restaurant (Side note: I recommend you do the same if you live in the area … maybe take a client out if you are able to get a reservation).
While looking at slideshows of the red carpet arrivals and reading recaps of the event, hosted by Demi Lovato, I was concerned. How will their fashion choices influence “everyday teens” and, in turn, some of your promotional campaigns geared toward the young adult crowd? I have mixed feelings about Lovato’s look, for example. Some media outlets think she looked “totally radiant.” Okay, maybe if she was guest starring in a Pigs in Space skit from “The Muppet Show.” I’ll give her credit for being bold in her choice, but her embellished graphic-printed minidress and “to the moon” ponytail … umm (pardon my lack of eloquence).
Minidresses seemed to be the theme of the evening. Most of the girls chose bubblegum colors (e.g., Lea Michele, Selena Gomez, Carly Rae Jepsen), although others went for darker and/or metallic colors (e.g., Kendall Jenner, Kylie Jenner, Miranda Cosgrove). I guess they want to look "their best" on stage while accepting that coveted surfboard award.
The guys appeared to stay in line with some of the current trends in promotional apparel—T-shirts were a hit. Justin Bieber opted for camo, while Ian Somerhalder and Darren Criss kept their look slightly more toned down with classic solid colors (white and charcoal, respectively). Finally, Joe Jonas modeled a graphic Tee beneath his blazer.
While you may not be a fan of “The Beebs” and company, many will disagree with you and it’s important to cater to the crowd and follow the hit and misses of the fashion world (emphasis on the hits, but you should also know what NOT to do). Here are three examples of T-shirts that you can use for your next promotion.
Men’s Organic T-Shirt – Climate Neutral from Continental Clothing Company 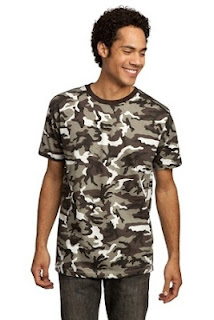 Short Sleeve Camo Perfect Weight District Tee from SanMar
Men’s Mercerized Cotton T-Shirt from Akwa by Pacico Inc.
(Editor’s Note: Just the mere typing of “Carly Rae Jepsen” has that awful song stuck in my head. I assume it’s in your head, as well. To make up for this, I am including a link to a much better version by Jimmy Fallon and The Roots.)
0 Comments
END_OF_DOCUMENT_TOKEN_TO_BE_REPLACED