Variations on a Classic: Baseball Shirts 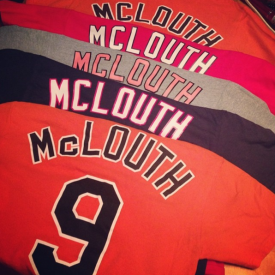 Next week is a time for celebration. It marks the start of the glorious six months known as the MLB season.

And my countdown to the Baltimore Orioles’ home opener is on. (Five days!)

While my cardinal rule of show-going is never to wear the shirt of the band I’m going to see, my baseball-game fashion is the exact opposite. At a game, I always am wearing the team’s colors and logos.

Despite my ever-growing pile of cleverly designed baseball T-shirts, my go-tos are the classic baseball shirts: team name on the front, player’s last name and number on the back.

And I don’t think I’m alone in this. After all, there’s a reason why teams release themed versions of these shirts. They're big sellers. (St. Patrick’s Day doesn’t even happen during the regular season and yet every team offers the classic shirt—and replica jerseys—in green.)

But just because you go for the tried-and-true design doesn’t mean there’s a lack of variety and choices—all of which may faintly smell of sunblock, beer, hotdogs or a combination of the three.

There’s the matter of which player to represent. Should I wear my Nate McLouth, Ryan Flaherty, Tommy Hunter or Nick Markakis shirt? (Fun fact: Only one of those four is still on the Orioles. But that doesn’t stop me from wearing them.) Or, maybe you've got a custom shirt with your name on it to add to the mix.

You might also have to choose between real names or nicknames. Should I wear my “Davis” shirt or “Crush” shirt in support of Chris Davis?

However, one thing I never considered was the potential for different ways to wear the players’ numbers—until now.

In an effort to get kids excited about math, Romania’s soccer team recently used simple math problems on its training jerseys to represent the players’ numbers. If you ask me, it’s ingenious! You better believe I would buy "McLouth 3x3" and "Hunter 58/2" shirts. A player's number is a big part of his (or her) fan base. Why not have fun with it?

All of these variations accomplish the same thing: they provide just enough of a twist and personality on classic looks.

Promotional apparel designs can work the same way. If you have something that already works, try building off of it. Branch off of your successes. Use your brand to your advantage. Soon, maybe we’ll all have a collection of your clients’ shirts to decide between, too.

For the record, I do have shirts for other teams—the Tampa Bay Rays, New York Mets, Washington Nationals, Philadelphia Phillies, Milwaukee Brewers, etc.—but when you only have one shirt per team, those decisions are considerably easier to make.