Last week, viewers tuned in to the 12-12-12 Sandy Relief Concert, where music legends and other celebrities banded together to raise money for victims of Hurricane Sandy.

Billy Crystal, Leonardo DiCaprio, Chelsea Clinton and more were on hand to tell stories about the storm and take pledges for donations with plans for proceeds to be distributed among the Robin Hood Foundations. Through the healing component of music, New Jersey natives Bruce Springsteen and Jon Bon Jovi, Long Islander Billy Joel and New Yorker Alicia Keys performed medleys of crowd favorites. Other bands and artists, including The Who, Coldplay’s Chris Martin, the Rolling Stones, Paul McCartney and the surviving members of Nirvana (Dave Grohl and Krist Novoselic) did their part as well.

Finally, never one to be left out, Kanye West and his friend auto-tune showed up to the event. Whether you love him or hate him, Mr. West attracts attention and churns out hits. So, in the eyes of promoters, it made sense to add him to the lineup, right? I’m admittedly a fan, but the set was confusing at best. The setlist didn’t necessarily seem appropriate for the cause, the sound quality was poor and there was no connection between West and concertgoers. Even worse, West’s purpose and high-profile performance were overshadowed by something so trivial in comparison: a leather skirt. To be exact, a Riccardo Tisci Givenchy skirt that is part of the designer label’s men’s collection. West paired the skirt with black leggings, white sneakers and a perennial favorite in promotional apparel, the black hoodie. There’s even a Twitter account called “Kanye’s Skirt” (@KanyeWestSkirts)—granted, there are only three tweets posted and the skirt has eight followers. The point: If you think it, social media will bring it.

Is there such thing as negative publicity? It’s the rhetorical question for the ages, perhaps. The skirt certainly distracted from West’s lackluster performance, but isn’t there a time and a place to make such a bold fashion statement? Perhaps, something a little more understated would’ve fit the bill—let the music speak for itself and do what you came to do—promote a worthy cause and help people as they piece together and rebuild in Sandy’s devastating aftermath. Marketers, I’d love to hear your thoughts on this. When you prepare a large-scale event for clients (maybe it won’t be seen by billions, even though that would be fantastic), do you mull over every last detail from your attire to giveaways?

In the meantime, as a fun sidenote since this is my last blog before the holiday season’s finale, here are a few practical uses for leather in the promotional products industry. Enjoy! 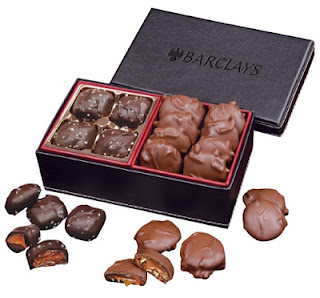 KBK Leather Journal from Rustico LLC
(Editor’s Note: Happy Holidays! In the spirit of classic rock, enjoy this little ditty from The Kinks.)