My Favorite Promotion ... "You Know What It Is"

Happy (early) Thanksgiving, everyone! To mark the official start of the holiday season (in two days, it will be acceptable to listen to holiday music if you’re into that), I thought I’d write a little blog about one of my favorite promotions.

I was born and raised in the Philadelphia area, but I am a fan of Pittsburgh sports teams. It’s not a random decision—my father grew up in the Steel City. This past weekend, I had the opportunity to make the six-hour drive to visit family and take in the Steelers/Ravens game at Heinz Field. Even though the game didn’t end in my favor, it was still a great time. The stadium is beautiful and filled with old relics, Vince Lombardi trophies (sorry, Eagles fans) and a spectacular view of the Pittsburgh Skyline.

When attending a Steelers game in November, there are several items to bring along:
• Layers of clothing (e.g., coats, hats, scarves, gloves, etc.)
• Your game face
• Your Terrible Towel

Even if you support another team, I’m fairly confident you’re familiar with the Terrible Towel. For those of you who are not, the Terrible Towel is a black and gold rally towel created in 1975 by then Steelers radio broadcaster Myron Cope. It is arguably the most famous sports rally towel in use and has undergone some slight redesigns since its inception including the release of a pink version in October 2009 to promote Breast Cancer Awareness. For a complete history of the Terrible Towel, visit the Steelers website.

I own two towels. One is the original black and gold towel; the other is still black and gold (our team colors), but commemorates the Steelers Super Bowl XIV victory over the Arizona Cardinals in 2009. I made sure to pack both of them before I left for my big trip. The Terrible Towel is more than just a promotional item—it’s a symbol of unity, identity and fun. It was an awesome sight to see thousands of towels being waved during the game under the bright lights on Sunday evening. We waved them in celebration, we waved them as a sign of encouragement and we waved them as friends (we did not wave them when Jacoby Jones returned a punt for a touchdown). In my opinion, this is the true definition of a successful promotion. It’s more than a rally towel bearing a logo; it carries emotional significance. What are some of your favorite promotions?

For your viewing pleasure, here are a few pictures I wanted to share: 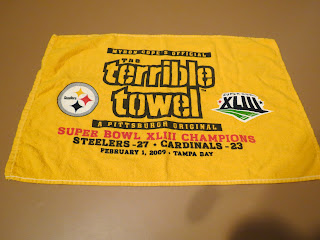