The Power of Unisex Uniforms 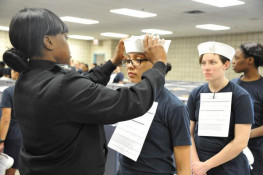 In a previous blog post, I delved into the details and advancements of several "genderless" clothing lines in the retail world. Now, it seems the military also is looking into creating "genderless" uniforms.

Recently, the Navy has used uniforms as a springboard to demonstrate its equal treatment of both men and women. According to Military.com, these gender-neutral uniform changes came as a direct result of orders from Secretary Ray Mabus.

Earlier this month, the first female recruits received their honorary white hats—or Dixie cups—a tradition once reserved for men only. All female enlisted sailors will be required to don the hats by Oct. 31, but all sailors are allowed to wear them now if they wish.

"This feels incredible, as we are making a part of history," said Seaman Recruit Madeleine Bohnert, according to a press release. "It's really awesome how something as simple as our cover is so symbolic in regards to equality and the uniformity in the military. It's a sense of pride knowing that we are a part of getting the first Dixie cups."

Another recruit agreed the hats were a step in the right direction.

"I think it's really beneficial because as we work side by side, we have to work as a team," Maria Frazier said in a press release. "For me, it's important that as we're working together, we look uniform so we can work in uniform."

Because isn't that what the military represents? Working together as a team for a unified goal—a greater good. Wearing the same uniforms certainly demonstrates the unified front on the outside, which can help bolster a unified front on a personal level.

Why shouldn't female military recruits be able to wear the honorary garb that is promised to their male counterparts?

"Having service members don the same headgear is symbolic of a Navy that is gender-blind," said Lt. Cmdr. Nate Christensen, a Navy spokesman, according to Military.com.

Aside from the Dixie cups, the Alternative Combination Cover (ACC) and current male combination cover for officers and chief petty officers can be worn by men and women in service dress uniforms. This will be required by Oct. 31, 2016.

The Recruit Training Command will redesign the Service Dress Blue uniforms in a jumper style for both men and women, and by the fall of 2016, the female version of the "crackerjack" jacket and tie will be removed from the possible uniform styles.

What does this mean for your brand? Even if you aren't a military supplier, it's time to start thinking about moving toward "genderless" uniforms and clothing items. Women in the workforce will appreciate the implications of unisex clothing because it means you value their work as equal.

However, that doesn't mean you should throw out all women's styles. It just means you should give them the choice.