By Kyle A. Richardson
Facebook Facebook Twitter Twitter LinkedIn LinkedIn Email Email 0 Comments Comments
Two weeks ago I wrote about the fastest growing and dying industries in the U.S. Several relevant markets were on the lists, including hot sauce production, which is expected to increase 22 percent to $1.3 billion by 2017.
"We are going through a culinary revolution across the U.S. and Canada," said Lauren Smith, vice president of sales for Hot Sauce Harry's. "People are waking up their tastebuds with new and exciting flavors." Of course, the proof is in the one million Scoville pepper, so the good folks at Hot Sauce Harry's sent me a selection of their sauces to show just why the hot stuff is doing so well these days.
As a hot sauce junkie (I add sriracha to everything, including ice cream) I was ecstatic to burn my taste buds to oblivion. Like my last review, I thought I'd give you a little insight into what it's like to try them all. At once.
But first, the reviews.
Barbecue: This one had strong molasses and hickory aroma with a bit of garlic. The taste was less maple and more tangy and sweet flavor. The heat on it was mild, although higher than your average grocery store BBQ sauce. This stuff would go great on pulled pork.
Cayenne: As soon as I cracked the lid, hot and peppery scents hit my nose and cleared my sinuses. The flavor was straight traditional pepper and vinegar flavor with a high heat level. If you're looking for a basic, high-quality hot sauce, this is it.
Chipotle: The chipotle sauce has a rich aroma, smokey and sweet. Unlike a lot of chipotle I've had, Hot Sauce Harry's was deceptively tangy, with more vinegar and pepper than most and moderate heat.

Garlic: I love the aroma on this one. Tomato, pepper and especially garlic make it smell like an Italian kitchen. Great garlic flavor here with low-to-moderate heat. Throw this in some marinara and you're set.

Habanero: Typically the hottest pepper in most sauces, the habanero doesn't have much of an odor, but after four samples its possibly my sinuses were just fried. The flavor here is more subtle, more complex and more vegetal than the others, and the pepper taste doesn't dominate. The heat, however, does, and this is easily the hottest of the bunch.
Steak: Steak sauces aren't hot and instead are designed to bring out the flavors in the meat. Sniff the bottle and you'll pick up vinegar, molasses and citrus peels; if you've had Agnostura bitters, it's very similar. The taste is a little sweet, a little smoky but with a sharp tang that leaves quickly. This bottle is not heat but all flavor.
Now, it wouldn't be a proper product review if I didn't do something stupid and potentially health-threatening, so... 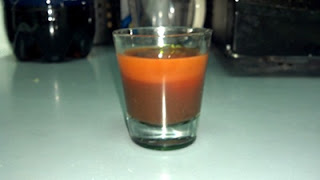 I'll tell you how it tasted when I regain the ability to taste. And to talk.
Conclusion: All the sauces are delicious and would make for great promotions. For taste my favorite is probably the garlic, but for heat fanatics, the habanero is the unquestionable winner.
Conclusion 2: Don't do shots of hot sauce.
0 Comments
END_OF_DOCUMENT_TOKEN_TO_BE_REPLACED