Not So Technically Speaking
March 8, 2016

Shooting at the Wrong Basket 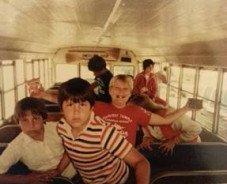 I weighed about 185 lbs. despite being about 5'8", which is how I got the nickname "Pillsbury Dough Boy." Notice the food in my hands.

When I was 12 or 13, I was on the basketball team. My school was small, so everyone made the team. Somehow I was still third string. When we did running drills, I usually was last. During some of those drills, I was so slow the entire team had to run again until one of us puked (thus the name, "puke drills").

I rarely got playing time. So when I did, it was usually when we were ahead (which was rare) or so far behind it did not matter.

Then one fateful day, I was playing in a game that mattered and the score was close. I was so excited—I knew I was going to be the difference maker. And then my chance came!

I was running faster than I ever had run. I was playing the best basketball I ever had played. Our opponent shot and I ran to get the rebound. I boxed out. I got the rebound!

In all the excitement, I forgot who shot the ball. I forgot where I was.

I shot the ball. Yes, I shot at the wrong basket.

I was so embarrassed. The entire gym was filled with a mix of laughter and sympathy. I kept playing. I never shot at the wrong basket again.

Had I played more, perhaps I would have realized where I was in all the excitement. (Or not.) Who knows for sure? But I never shot at the wrong basket again.

I have used that mistake as the basis for many lessons for myself for many years. The most important lesson is that mistakes happen, and as long as we learn from them, mistakes are good things. Some mistakes are bigger (imagine I made the basket and we lost by a point), and some are smaller. I think it is easier to learn from smaller mistakes.

Encourage your employees to take risks and make mistakes. Treat them well and keep them a long time. They’ll eventually make the shots in the right basket.

Heck, make a few mistakes yourself.

What Problem Are You Trying to Solve?
Comments
The Top Lists