Last month I had the privilege of joining a select group of promotional products professionals in Washington, D.C., for Promotional Product Association International’s (PPAI) Legislative Education and Action Day (L.E.A.D.). Influential industry members from across the country volunteered their time to head to our nation’s capitol, to raise awareness about our industry and the legislation that impacts suppliers and distributors.

We’ve reported on many of these business topics—independent contractor requirements, the Affordable Care Act, Toxic Substances Control Act reform—but it is another thing entirely to go to D.C. and speak to senators and representatives about our industry, our concerns and our needs. When you see a small section of our community—just 80 volunteers in all—organize more than 300 meetings over two days, you start to appreciate the significance of what PPAI has put together.

It isn’t just the numbers, either: Who was in attendance is just as important. Supplier CEOs, distributor franchisees, multi-line representatives and more all stood united in D.C. We were organized by state, with many groups consisting of companies in direct competition with one another. Along with some suppliers and distributors, I was on the Pennsylvania team representing Promo Marketing next to ASI’s own senior vice president and senior counselor, Chuck Machion. No one was concerned about business rivalries. We were all there to do the same job. 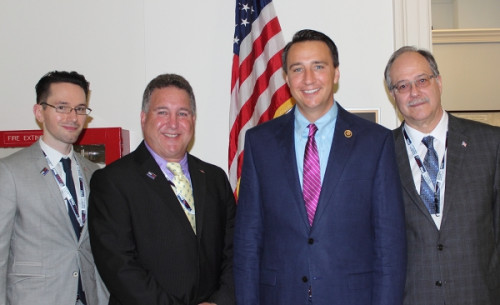 What most stood out, however, was seeing that what we’re doing works. In several meetings, staffers greeted members of our team by name, recalling them from last year’s event. In other meetings, representatives mentioned receiving emails from suppliers and distributors as part of Promotional Products Work! Week. One staff member we met with took notes on the PPAI L.E.A.D. notebook he received in 2015. If you think events like this don’t have an impact, you’d be surprised.

You also may be surprised to learn that every D.C. staffer looks like they’re 17. Don’t let “House of Cards” fool you: Everyone in the Capitol is too young to drink.

I want to thank PPAI for inviting me along this year, as well as all the members of my team—Chuck, Bruce Korn of Zakpack Inc., George Jackson of George Jackson Promotions, Larry Whitney of Polyconcept North America and Norm Hullinger of alphabroder.

It’s said you should lead, follow or get out of the way. The promotional products industry has made it clear which path it will take.