Forbes is giving readers a new way to connect with content through the launch of its Forbes Store e-commerce platform. 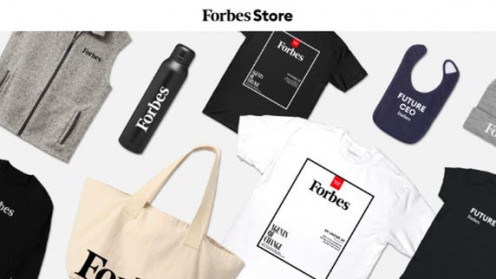 “The Forbes Store is designed to provide our loyal communities with merchandise and apparel in an effort to connect with our audiences on a personal leave,” Emily Jackson, vice president of e-commerce for Forbes, said in a release. “These exclusive Forbes designs are tailored to celebrate and champion entrepreneurs, women and millennials, and through our unique collaborations, we will provide one-of-a-kind apparel that resonates with our audiences around the world.”

To do that, Forbes is releasing merchandise that promotes its proprietary editorial verticals, such as Forbes Under 30 and Forbes Women, the latter of which will include a product capsule celebrating female empowerment and inclusion.

The first drop is a collaboration with the Boys Lie apparel brand, founded by Tori Robinson and Leah O’Malley—both of whom were included in the 2021 Under 30 list.

There are also more evergreen products, like a branded fleece vest (the unofficial uniform of every businessperson), Forbes logo hats, tote bags, water bottles, and even baby clothing that says “Future CEO” and “30 under 3.”

It’s a smart approach—the stock logo products can stay forever without getting outdated. But cycling in other fashion designers and brands for more themed drops gives Forbes fans a reason to keep coming back to the store. It also helps promote the magazine and digital products by including designers and artists who have been included in Forbes' lists and features. Just like artists who create music and tour, merchandise is a valuable revenue stream beyond the core product.

(We happen to know a thing or two about digital publishing.)

'You cannot solely rely on a large audience': Why Forbes believes readers will pay to wear its brand https://t.co/EX4uDMozMZ

It’s a cool twist on a branded merchandise store. Bring in a rotating cast of contributors, keep a base stock of products but with the promise of new things dropping all the time, and touch on the themes of your own brand in new ways.

It's a similar approach to the one Netflix has implemented for its online store, with rotating designer collections. We wouldn't be surprised to see more of this as e-commerce continues to evolve.