How Will Tariffs Affect Promotional Businesses? Some MAGA Hats Provide a Clue 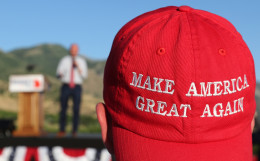 The Trump administration's decision to include hats and headgear on its latest list of tariffed products could have an impact on his reelection campaign and supporter base, as some "Make America Great Again" campaign hats are made in China, which could affect prices.

David Lassoff, manager of IncredibleGifts, which imports "Make America Great Again" hats from China and embroiders them in California, told ABC that all facets of production will likely have to be done domestically, which will drive up the price.

The other option for Lassoff would be to source from a different country with similar production costs, such as Vietnam. Lassoff also told CBS that he was keeping his fingers crossed that major retailers like Amazon and Walmart are successful in lobbying against the tariffs, which wouldn't be confirmed until August.

Also, companies like IncredibleGifts are making sure to build a stock of imported hats now in the event that the tariffs go into place in August as planned.

"There might be a limited quantity [of hats] in the future," Lassoff told ABC. "We're trying to make sure we have enough hats in stock now, so if things change, we're prepared."

Given their ubiquity among Trump supporters, MAGA hats are pretty important for the companies that sell them.

It's important to note that these price changes would only affect unofficial Trump merchandise. IncredibleGifts and other companies sell licensed MAGA gear at a lower price point, but are not the official providers. Official Trump Campaign MAGA hats, which are made in the U.S., already sell for $25. Still, that price disparity—$9 to $12 for an imported, unofficial cap versus $25 for an official, American-made version—illustrates clearly the challenges now looming over promotional products companies that rely on imported products.

While the campaign items themselves might not hit Trump and his campaign's bottom line, the family's business could see negative impacts of the tariffs.

A 2016 Washington Post story reported that amenities at Trump hotels, like shower caps, laundry bags, pet collars and leashes (all of which are included in the list of tariffed items) are made in China or Taiwan. Items in the Donald J. Trump apparel collection, including dress shirts and ties, are also made abroad, with China as one of the sources.

While Trump's campaign might still be free to sell MAGA hats at their current rates, the tariffs would mostly affect promotional products distributors who import soft goods and decorate them in the U.S., which is extremely common.

It gives companies a few different options: Increase prices by sourcing domestically, possibly driving customers away, or look elsewhere for cheap labor and imports, like Vietnam or Bangladesh.