Not One to Chicken Out, KFC Expands Marketing Clout With DIY Drone for Indian Consumers

Due to last week’s Las Vegas-situated PPAI Expo, yours truly has developed a greater interest in traveling a tad more. I will likely never come down with wanderlust, but I know a few spots will tempt me and make me yearn for airplane snacks, room service and sightseeing excursions. Thanks to Kentucky Fried Chicken (KFC), I am wondering what a trek to India might yield, as the restaurant chain devoted the last two days to delivering to inhabitants of the world’s second-most populous country meals whose packaging they could convert into drones, an opportunity that definitely made me just a wee bit jealous of those fortunate few.

The poultry powerhouse has not shied away from marketing its goods through some interesting means, with branded merchandise being a sensible offering and other products and promotions being, with all due respect, a little eccentric. While U.S. residents are still working for the weekend, Indian denizens will soon be greeting Saturday’s sunrise, with KFC having endowed 24 lucky devotees with what they could come to call the technological opportunity of their lifetimes. To promote its new Smoky Grilled Wings (Lord, have mercy!), the entity provided the two dozen diners with internet instructions on how to transform a box into the drone, with an app helping them to pilot it via their smartphones and Bluetooth. 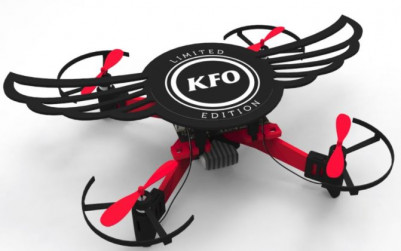 While the introduction of the wings further proves that KFC consumers will never have slim pickings, the powers that be could not reward their allegiance en masse, although they did at least choose dwellers from 10 cities, including Delhi and Mumbai, as the fans who can come to drone on and on about not only their good fortune but also their gadgets’ “neat” factor. The Kentucky Flying Object makes an interesting addition to KFC’s numerous displays of ingenuity, with The Verge noting that the chicken titan has made many of them available in Asian markets.

“Food and technology are two things that keep us and our consumers excited,” chief marketing officer of KFC India Lluis Ruiz Ribot said of his employer’s recognition that the days of simply letting products stand on their own as commercial options are things of the distant past.

Because of that pairing, KFC, whose drone brainchild is not its inaugural nod to tech-savvy end-users, certainly made the recipients much more eager to blast through their wings and probably even more excited to learn what the company might release next in its quest to peddle “Finger Lickin’ Good” selections. One wonders why KFC chose India as the location for the packaging idea’s launch point, but perhaps the chain, with more than 20,500 global outlets, can help American audiences to keep counting their chickens in the hopes of being the beneficiaries of its marketing know-how.