Richard Simmons Is (Sort Of) Back With Branded Merchandise 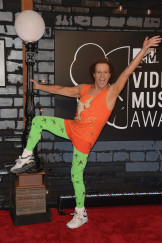 Richard Simmons' disappearance is one of the strangest mysteries of this decade. We know as much because there was a whole podcast dedicated to it, and any compelling mystery has an accompanying podcast.

But all jokes aside, it's super weird, yo. This was a guy who used to be basically unavoidable. His larger-than-life personality worked well for selling workout tapes and other merch. People loved him, and he seemed to love the world back.

And then he was gone.

No one has really seen him in five years, aside from blurry pictures of him in the back of cars. It's all very shady. We guessed last year that a new line of merchandise might be the catalyst for a Simmons re-emergence, and we thought we were right when we saw that there is a new Richard Simmons merchandise line being launched on TalkShop.live, but it turns out Simmons won't actually appear in any of the videos himself.

Let's step away from the Simmons mystery for a minute and talk about TalkShop.live. The way TMZ describes it as "Think QVC meets Facebook where anyone—even celebs—can go live to plug their merch."

It would seem to be a platform tailor made for someone like Simmons, whose personality takes precedence over his actual product. People love to buy things specifically from him because he's as much a fun character as he is an actual business owner.

So, it makes sense that his first item for this platform is a 2019 calendar with a motivational quote for every day, as well as new and classic exercise merchandise.

But, fans expecting to see Simmons show himself and hawk his products will be disappointed to only see his friends on the channel.

With the popularity of things like Facebook Live and whatever Instagram's version of that is called, programs like this TalkShop.Live could be the future for selling merchandise. It combines the tried-and-true methods of things like QVC but packages it for the cable-cutting and social media-savvy millennial crowd.

But seriously, where are you, Richard? Can we expect to see him on the platform eventually?