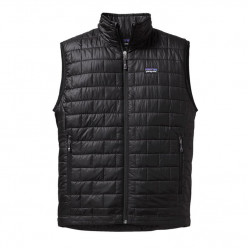 Patagonia is taking a promotional stand if we've ever seen one. According to BuzzFeed News, the company announced that it is getting mighty choosy when it comes to its corporate sales. Now, when a prospective client attempts to place an order for branded Patagonia Nano Puff vests, they very well might get a rejection email.

The company told BuzzFeed News that it is shifting its corporate accounts business to "do-gooder B corporations." In other words, Patagonia is looking to partner with businesses that are committed to important social and environmental causes. The list of no-go partnerships now includes financial companies, apparently, as well.

Binna Kim, the president of a communications agency (ironically) called Vested, was the first to notice the new policy.

“While I think new fintech startups are going to be devastated if they can't get co-branded Patagonia vests, I'm not too surprised that Patagonia is taking a closer look at how their brand is being used, and probably trying to not let Patagonia be synonymous with the ‘finance bro,’” Kim told BuzzFeed News.

When Kim went to place a recent order for branded Patagonia vests, she received the following email:

The end of the #fintech uniform?! Farewell #patagonia vests. pic.twitter.com/3PpykELkZb

Following that email, the company released an official statement:

“Our corporate sales program manages Patagonia’s sales to other companies, non-profits and other organizations," it said. "We recently shifted the focus of this program to increase the number of Certified B Corporations, 1 percent For The Planet members and other mission-driven companies that prioritize the planet. This shift does not affect current customers in our corporate sales program.”

Patagonia has been outspoken about its political and socioeconomic beliefs, so it's not a huge surprise that the company would make a move like this. However, it's certainly an extreme measure. Usually, this works the other way around, with buyers wanting to purchase from companies with a good record on social and environmental issues. Apparel companies vetting their corporate clients in this way is less common.