By Elise Hacking Carr
Facebook Facebook Twitter Twitter LinkedIn LinkedIn Email Email 0 Comments Comments
I have a confession to make. I have never watched any of the “Die Hard” movies—not the original, not “Die Hard 2” and certainly not “Die Hard: With a Vengeance.”
All I can say is that I associate Bruce Willis with the franchise. But, I recently learned there is more to Willis. He’s not just the ex-husband of Demi Moore. He’s not just an ‘80s action film star (often playing the role of some cop, hitman or military “fill-in-the-blank”). Finally, he’s not just another “bald head.”
Did you know that Willis won the coveted voiceover role of baby Mikey in “Look Who’s Talking” and “Look Who’s Talking Too?” Or, that his recording of “Respect Yourself” reached #5 on the charts in January 1987 (the chart in question remains unclear)? Finally, for our purposes, in 2000, he was voted to PEOPLE’s Worst Dressed List. To make matters worse, designer Elie Tahari released the following statement: “Obviously, fashion is not his specialty. He doesn’t look like he spends much time shopping for clothes.”
Well, times have changed. Promo Marketing’s lovely production editor and resident fashionista, Colleen McKenna, recently gave me the June/July 2012 edition (aka The Fatherhood Edition) of Esquire, and who did I see prominently displayed on the cover? Willis, of course (sorry, I tried to think of something funny to throw you off … but I’m low on material). Willis clearly has adapted to current trends because he was sporting none other than a black burnout T-shirt. The shirt certainly draws attention to his muscular build (he opted not to do the whole layering thing), so his motive for wearing this piece remains unclear. Nevertheless, that’s what all Esquire readers get to see.
When I wrote “Runway Ready: Strike a pose in the trendiest promotional T-shirts and tanks on the market” for the April 2012 issue of Promo Marketing, I learned burnouts are in high demand. Just browse through catalogs or do some window shopping at the mall if you don’t believe me, or listen to Margaret Crow, director of marketing at S&S Activewear, Bolingbrook, Ill.
When asked about some of the hottest trends, Crow responded, “It used to be that basic T-shirts were the only ones being screen printed. But now fashion T-shirts—burnouts, combed ring-spun cotton and trendy silhouettes are being shown at retail, so promotional products dealers are asking for and buying more trendy styles.”
Later in our conversation, Crow offered a specific pointer for distributors: Know what your buyer is interested in. For example, the same burnout football tee can be sold to a concert promoter and to a cheerleading camp, but the message should be specific for these two groups. “To the concert promoter, it’s a cutting-edge fabric; to the cheerleading camp, it’s the team colors and athletic striping that make the sale. Taking the extra step to point out the benefits to each group will increase your sales,” Crow explained.
Younger buyers, in particular, are demanding fashion—and there is a big place for it in the promotional apparel industry. Are you taking advantage of this potential opportunity?
If not, here is what you’re missing out on:
The Men’s Burnwood Burnout Tee from Bodek and Rhodes 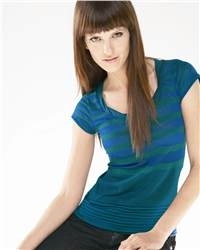