With more and more millennials tossing their paychecks toward fast fashion brands like Zara, H&M, Forever 21 and ASOS, and abandoning the allure of brand names, it’s shocking that luxury fashion brand Gucci even has any skin left in the game. And yet, today’s teens are lining up to spend $590 on the company’s iconic logo T-shirt, solidifying the fact that Gucci has made one of the most epic comebacks in fashion history. No longer is the brand synonymous with your grandmom’s sweaters. These days, it’s a fashion staple you can find in anyone’s closet, and we wanted to investigate how the company pulled it off. 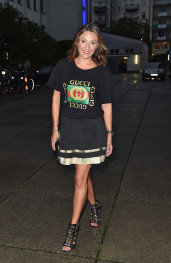 According to Business Insider, Gucci’s parent company Kering SA reported a 48.7 percent jump in same-store sales during the first quarter of 2018. And the two quarters before that saw jumps of 43 and 49 percent. Even crazier, it’s the teens and millennial shoppers that are flocking to the stores. In the first three quarters of 2017, about 55 percent of Gucci’s sales were from consumers under 35. Meanwhile, the annual Piper Jaffray teen survey asked 6,000 teens in the U.S. to rank their favorite apparel brands, and Gucci placed 10th.

Business Insider attributed Gucci’s comeback to the resurgence of the ‘90s logo trend. This is also the reason for the recent popularity of Calvin Klein, Champion and Tommy Hilfiger.

The Los Angeles Times credited Alessandro Michele, Gucci’s new creative director, and Beyonce for the brand’s valiant return. Michele has been positioning Gucci as an out-of-the-box fashion powerhouse, thanks to new projects, such as the GucciGhost collaboration with graffiti artist Trouble Andrew. Beyonce’s role comes in the part of her viral “Formation” music video, in which she wears custom Gucci booty shorts in a dance sequence.

What’s impressive about Michele’s work at Gucci is that he has no fear. His vision combines the grandma chic looks of Gucci collections past, but he puts a unique spin on it that continues to turn heads on the runway. He’s also abandoned the sexier, provocative looks of past Gucci seasons in favor of messages of empowerment and self-expression. Men are wearing lace tops; women are wearing sweatshirts. His instincts are untouchable to say the least. Did we mention that one of the company’s best performing items was its Princetown fur-lined leather shoes? 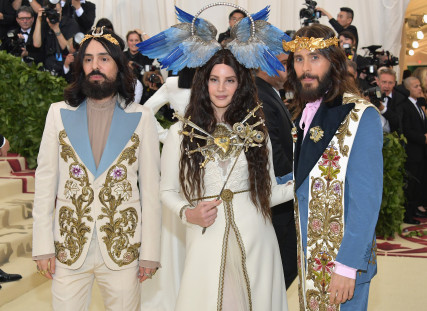 I just had to include this picture of Alessandro Michele, Lana Del Rey and Jared Leto at the Met Gala. | Credit: Getty Images by Neilson Barnard

“This fearlessness seems perfect not only for gaining attention on the red carpet but also for street style–a time when blending into the background is definitely not the aim of the game for the fashion personalities strolling between shows,” writes The Fashion Law.

Demand for these items is so high that Gucci is struggling to meet demand, according to The Business of Fashion. This is part of the reason the brand has decided not to discount any of Michele’s future collections. These are investment pieces, and Gucci has no plans to make them more obtainable.

“The idea is to give longevity and sustainability … and also not to disappoint the customer, who might buy the item at full price and then, after two months, if it’s marked down, [would not be happy],” Marco Bizzari, president and CEO of Gucci, said according to The Business of Fashion.

Pandora Sykes, fashion features editor of Sunday Times Style, told The Fashion Law that Gucci’s success can also be attributed to its Instagrammable fashions. She said it’s not a political statement—it’s about having fun.

According to W Magazine, Gucci has another group of people to thank for its massive success: the millennial shadow committee. Bizzarri revealed that the company has a committee of millennials under 30 that he meets with periodically. This committee provides new ideas, like cutting the leather differently to avoid wasting material. While not proven, W Magazine has also hypothesized that this is why Gucci recently announced it would go fur-free.

So how does this affect promotional apparel suppliers and distributors? First of all, logomania isn’t going anywhere. As the company continues to churn out logoed belts, bags and tees, it’s safe to say promotional apparel trends will continue to follow suit. And, there’s no better time to let your logo do the talking. Try different iterations of the logo’s color scheme, and limited-edition collections. 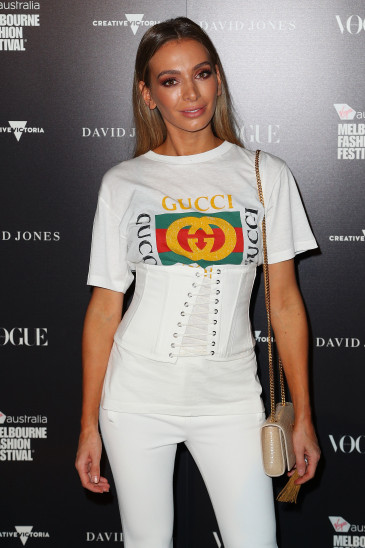 Design the logo to take up the bulk of the apparel item. There’s also no better time to commit to eco-friendly specifications when it comes to the manufacturing process. If Gucci is putting these measures into practice, then it’s only a matter of time before the rest of the fashion world catches on. Finally, it’s all about the millennials. If there are only a few millennials on your design and marketing team, it’s time to consider adding a few more power players. Thanks to social media and online networking, millennials are hyper aware of the current fashion trends, and they might have some ideas you haven’t thought of yet. Who knows? Maybe your company will be the next Gucci Gang.