The court case between Adidas and designer brand Thom Browne reached Manhattans's Southern District Court yesterday, where it will be decided whether Thom Browne infringed on Adidas' iconic three-stripe motif with its own horizontal stripe design.

Adidas is seeking damages of $867,225, which it claims is the amount it would have made in licensing fees from Thom Browne – and $7 million in profits that Adidas alleged Thom Browne made from selling products with the stripes Adidas has been using since the '40s.

The difference, of course, is that the Thom Browne designs use four stripes, whereas Adidas is known for using three. But, Adidas has deemed them similar enough to explore legal action. (More on that in a minute.)

In 2017, the German sportswear brand took an e-sports company to court over the use of three stripes. Before that, Adidas settled out of court with Juicy Couture. 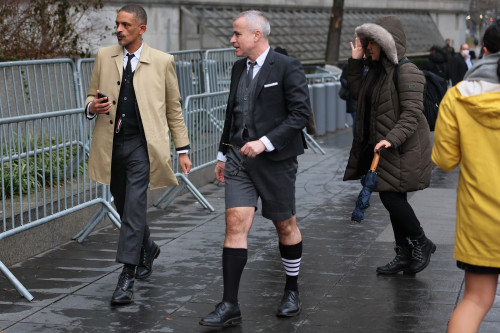 Adidas' legal representative R. Charles Henn argued that the there-stripe mark has been used in the U.S. for more than 50 years, and that Adidas spends $300 million annually in advertising and makes $3.1 billion in sales from products with the stripes.

While Thom Browne products use four stripes, Henn argued that it was originally a similar three-stripe design, and that only changed to four in 2007 after Adidas approached the brand's CEO.

Henn also pointed to a survey where 2,400 customers were shown Thom Browne striped products, and 26.9% of the people thought it was made by Adidas.

It gets even murkier as Thom Browne has entered the sports industry, sealing a deal with FC Barcelona and the Cleveland Cavaliers for off-field apparel.

Thom Browne's attorney, Robert T. Maldonado, pointed out that the designer brand changed from three to four stripes explicitly to avoid a lawsuit like this with Adidas. He also argued that, at the time, Adidas did not object to the change to four stripes, and hasn't until now.

"Thom Browne doesn't agree that a decade long delay is acceptable," Maldonado said, according to Yahoo. "Three stripes are not the same as four horizontal bars. They fell asleep at the wheel and woke up too late."

Whether or not Adidas is victorious here, it shows just how careful apparel designers need to be. Even the simplest design element could be seen as an infringement.

Just wait until Adidas sees what Aldi is doing.