The Tokyo Olympics, originally slated for this summer, were postponed until next summer due to the coronavirus. Given the sort of last-minute nature of the announcement, officials in Japan had already cranked out a huge supply of Tokyo 2020 merchandise.

Similarly to political merchandise, the merchandise is very time-sensitive, since a ton of it has the year built right into the design. And the merchandise is in an even more interesting predicament right now because Tokyo is still grappling with the ongoing COVID-19 outbreak, which means a lot of businesses remain temporarily closed. This includes the merchandise stores set up to sell Tokyo 2020 stuff.

According to the Japan Times, five Tokyo 2020 shops will close at the end of this month or beginning of June, and another store will scale back sales. As of the end of April, there were 89 dedicated Tokyo 2020 stores in Japan, so this is still a relatively small drop in the bucket.

But it could spur a huge boost in sales as people try to get their hands on what will no doubt become collectibles—commemorations of the first time the games were put on hold since World War II.

“With Tokyo 2020 possibly delayed or even canceled, these are precious items,” one merchandise seller told Reuters back in March, before the news of the postponed games came. This particular shop owner was selling Olympic pin badges for $60 on Mercari. 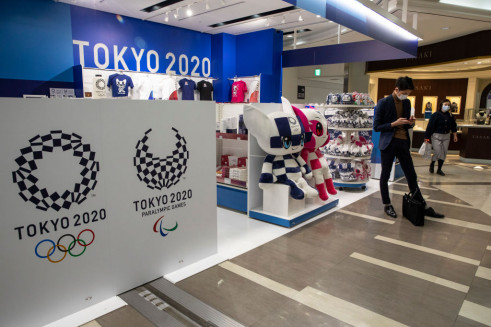 The official Olympic Tokyo 2020 souvenir shop at Narita International Airport on March 26, 2020 in Tokyo, Japan. The Olympics have been postponed until 2021 due to the Coronavirus. | Credit: Getty Images by Paula Bronstein

“This [merchandise] may become scarce,” one seller wrote of a stuffed mascot. “Why don’t you take the chance?”

During the lead-up to the games, shopping districts in Tokyo were decorated with Tokyo 2020 flags, and a clock in Tokyo Station counted down the days until the July 24 opening ceremonies.

Officials estimated that the Tokyo games would yield about 14 billion yen ($130,465,300), but they aren’t panicking just yet. They might not hit that exact figure, but the approach to marketing the games hasn’t changed, according to spokesperson Masa Takaya.

“We haven’t changed our target” Takaya told the Japan Times. “We will stick with the original target set previously. We are committed to achieving sales targets previously set and keep operating our licensing product sales.”

This means the organizers will continue to sell licensed merchandise through “appropriate channels,” but make strategic changes as the coronavirus pandemic develops.

The glaring detail is that the merchandise will still say “2020” until the organizers come up with a new design. So, no matter what, these items are going to be reminders of a postponed games. The Tokyo 2020 games are not happening. The 2021 events likely will, but no amount of current market optimism will change the nature of the items.

The Reuters article poignantly likened these items to the Lehman Brothers merchandise that went for big money online as sort of a morbid commemoration of the 2008 financial collapse.

This is currently one of the most interesting (and uncertain) times in recent history. Postponing or even canceling the Olympics is a huge deal. The Tokyo 2020 organizers know this, and they might be consciously selling products still knowing full well that people are buying them as even more noteworthy keepsakes rather than just hype around the games. For that, they’ll still sell plenty of Tokyo 2021 merchandise when the time comes. This is now a different merchandising operation all together. And it may yield even more than their estimated revenue.

The Tokyo 2020 marketing team started by having to find a new logo, but recovered quickly. Funny how history sort of rhymes, isn't it?

What Will Happen With All of the XFL Merchandise?