For the opening track on their 1969-issued eponymous debut album, Led Zeppelin chose to blast eardrums with “Good Times, Bad Times.” Five decades after the release, one can easily say that the English rockers have experienced more of the former than of the latter, and Vans is helping to commemorate the nine-tune masterpiece’s anniversary through a branded apparel collection destined not to leave anyone “dazed and confused” over the group’s enduring influence.

The four-piece line debuts next Friday, with that date coming just under six weeks after the 50th commemoration of the quartet’s recorded arrival. The Jan. 12, 1969 offering did not top the Billboard charts, but it set up the Robert Plant-led band for a stunning career that saw every other one of its studio albums reach No. 1 or 2.

No matter the sales success that the debut work had, it has remained a classic, and Vans, having proven itself a solid chronicler of historic greatness and pop culture brilliance, is honoring the Rock and Roll Hall of Fame act through two pairs of shoes, a long-sleeve tee and a trucker hat. We here at Promo Marketing have made it no secret that we hold intense allegiance to The Beatles, but Led Zeppelin has given us legendary songs, too, so we might place aside some of our tax return money to immortalize Plant, Jimmy Page, John Bonham and John Paul Jones even more, especially through the footwear options. 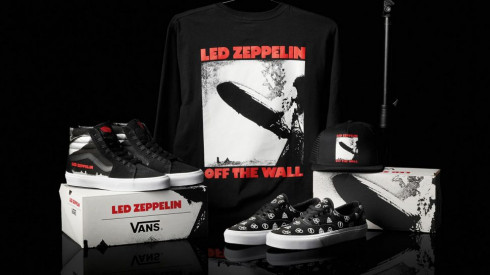 Teeming with band-specific text and images, the shoes serve as reminders that even though Led Zeppelin has entered the annals of classic rock (meaning that they will likely not record or release anything together again), they're still musical legends. Add the other products, and we have a very appealing nod to the power of nostalgia.

If we were to ask “how many more times” that Vans might go the footwear route to connect end-users with artists, musicians or other creative sorts who have stood the test of time, we could say we hope it will be at least once more, as this year also marks the 50th anniversary of the release of “Abbey Road,” The Beatles’ oh-so-irresistible next-to-last studio album. Since its cover has drawn attention for the lack of shoes on bassist Paul McCartney’s feet, we would definitely suggest a three-element shoe collection to laud the Fab Four. Vans, let’s talk!

Until then, Led Zeppelin-obsessed fans, as of next Friday, “your time is gonna come.” But if you can't wait that long, there's always this snowboard to help the time blow by:

In celebration of our 50th anniversary, we teamed up with @Burton to create the Misty Mountain Hop snowboard. Our new book, “Led Zeppelin by Led Zeppelin,” included as a free gift with purchase. More info : https://t.co/z2x5JvFceW pic.twitter.com/mueBQKYjPm