While one might presume that Robert S. Davidson is a big believer in the “art for art’s sake” mindset, the sculptor has also made apparent that he wants to act as a safeguard for other creative individuals’ rights. Last week, following a seven-and-a-half-year saga, the artist won a staggering $3.5 million in a case against the United States Postal Service (USPS), with Judge Eric Bruggink scolding the agency for its improper use of Davidson’s Statue of Liberty rendering on a “Forever” stamp series. 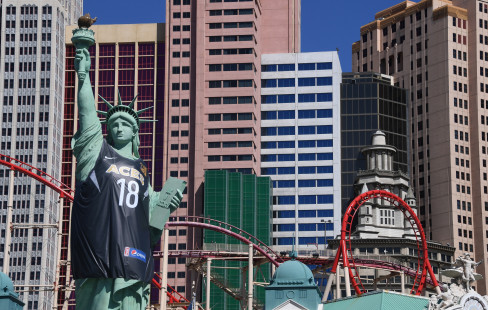 The victor has given hope to anyone who posits that good things come to those who wait, as he had been battling the main entity, in earnest, since 2013. His lawsuit stemmed from a 2010 decision by the USPS to use an image of his artwork. Thinking it showed the actual New York City-based monument, the eventual defendant came to find out that the depiction was a shot of Davidson’s sculpture of Lady Liberty that greets visitors to the Las Vegas-situated New York New York Hotel and Casino.

Now, the USPS possesses obvious clout because, as Newman told us on “Seinfeld,” when you control the mail, you control information. But nobody can flout the law, and Davidson, feeling wronged, especially after sales of the stamp swelled way beyond four billion items, looked to seal the agency’s fate through his lawsuit.

The adhesives’ discontinuation occurred in 2014, but that came three years after the USPS had become aware that Davidson’s version, which he boasted of as a “more fresh-faced,” “sultry” and “sexier” product than the nearly 132-year-old New York Harbor occupant, was not just a photographic tribute to the Statue of Liberty. Looking to minimize its mistake, the mail provider claimed Davidson had simply knocked off an existing piece of art to craft his sculpture and that he should not receive copyright protection.

Representing the U.S. Court of Federal Claims, Bruggink sided with the plaintiff, countering the eventual contention that Davidson should reap no more than $10,000 by endowing him with $3,554,946.95, plus interest, which the USPS must pay by July 27. He derived that total based on a royalty rate of five percent in conjunction with revenue obtained through the erroneous stamps’ sales tallies, with the winner’s lawyer, Todd Bice, holding that, in deeming his client victorious, the court is punishing the USPS for what he presumes is a practice of ignoring “the rights of artists like Mr. Davidson, [by] simply taking intellectual property with after-the-fact offers of nominal compensation.”

Having looked at this matter 11 months ago, Promo Marketing had a feeling that the plaintiff might walk away with a favorable outcome, as it seemed pretty obvious that the USPS had failed to rectify its mistake in any true fashion. We would certainly like for everything to go well when businesses or establishments seek permission to use images as elements of promotional campaigns, so it is pretty tough to be sympathetic to the postal service, as its failure to give credit where it is due has resulted in this massive payout, which it could have avoided had it, in licensing Davidson’s photo from Getty Images for $1,500, simply asked more questions.

The artist, whatever his next step might be, has plenty of career options now thanks to this unexpected windfall, and his matter is serving as a reminder that it does not pay to be a daredevil when it comes to using unlicensed artwork or to crediting work properly, if at all. We live in litigious times and probably will continue to do so for the foreseeable future. With that said, unless businesses and corporations cover every base regarding trademarks and copyrights, they, much like the USPS, can expect to take a few costly lickings.